AFP, Monday 7 Oct 2013
We are ready for Nigeria, we are very ready. We learned a lesson from the mistakes we made last time, says Ethiopia's Teshome

In matching blue jerseys and red shorts, Ethiopia's footballers confidently criss-cross their home pitch, launching the ball back and forth.
The players press on under the blistering morning sun for over two hours. At this crucial stage in the 2014 World Cup Africa zone qualifiers, the team knows that every minute of training counts.

"We have tried to prepare them physically as well as mentally in the first week and now we are doing our tactical work and we will continue in the coming few days to combine the two," said Ethiopian 'Waliya Antelopes' coach Sewnet Bishaw, as his team waged a practice match behind him.

Ethiopia are preparing to face Nigeria on Sunday in their toughest qualifying match yet.

Though the odds are stacked against Ethiopia – Nigeria rank 36th in the world, according to international football governing body Fifa, while Ethiopia clocks in at 93 - the 'Waliyas' maintain an unflinching resolve to win.

Having beaten 2010 World Cup hosts South Africa to land at the top of their group, it is the closest the Horn of Africa nation has come to reaching the finals.

Ethiopia know the next match will be far from easy. On top of their impressive global ranking, Nigeria have more international experience and boasts several players from top European leagues.

But the 'Waliyas' refuse to let that spook them. 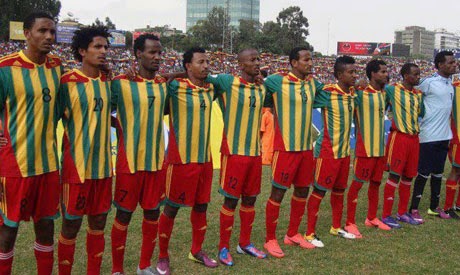 Having played Nigeria last January at the Africa Cup of Nations, Ethiopia are familiar with the strength of Nigeria's 'Super Eagles', who won the game 2-0 before moving on to win the lift the trophy in South Africa.

"We are ready for this match, we are very ready. We learned a lesson from the mistakes we made last time," said midfielder Menyahil Teshome.

Coach Sewnet said despite Ethiopia's defeat, the Nigerian squad is not a better team and the 'Waliyas' maintained their strength until the last 10 minutes of the game.

"If you look seriously at that match, Nigeria were not a better team than us. Up to the (end) we were performing good. But in the last 10 minutes they used their experience, so they got two penalties," he said.

"I think we will have a better game in the coming match against Nigeria," Sewnet said.

But he admits training has been set back by the absence of the team's four professional players, including star striker Saladin Said, who are expected early this week.

Ethiopia – a country better known for their renowned runners than their footballers – have amazed supporters by making it this far in the qualifiers.

Menyahil said his team, regarded as underdogs among powerful African national football teams like Ghana and Ivory Coast, is bolstered by a strong sense of nationalism and a refusal to be intimidated.

"Our strength is our team spirit," he said, sweating after training at Addis Ababa's national stadium, which is lined with posters of the late Ethiopian Prime Minister Meles Zenawi.

"We have nothing to fear. Until now, we've been supported by our people," added Menyahil, who was fielded illegally in a match against Botswana, costing the team three points.

Though preventing Nigeria from scoring away goals is crucial if Ethiopia want to proceed, coach Sewnet said the team is focused on both defending and attacking, and is not prioritising one over the other.

And while he insists he is focusing on winning each match individually, instead of pressuring his team to reach Brazil, he does not scoff at the idea of making it to the World Cup.

I am Nigerian. I know Ethiopian. Once they decide means decided. It is not jocke Ethiopia will fully beat Nigeria. We don't have choice other thsn accepting z reality. Our team members are drinking beer. Poor Nigeria my mother land