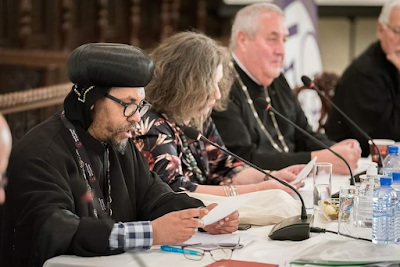 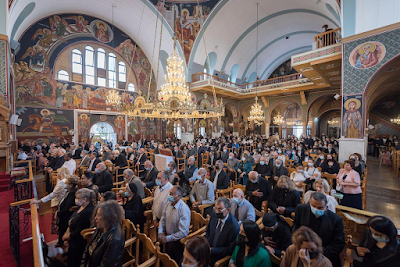 እሁድ ግንቦት 7፣2014 ዓም በግሪክ ሳይፕረስ በቅዱስ ጊዮርጊስ ካቴድራል በጉባዔው ለመሳተፍ ከመጡ የልዑካን አባላት ጋር የአካባቢው ምዕመናን በጸሎት ተሳትፈዋል። Photo =WCC
ይህ በሳይፕረስ የተደረገው ጉባዔ ላይ ሊቃነ ጳጳሳት፣ዲያቆናት፣የአብያተክርስቲያናቱ የሃይማኖት ምሑራን ፕሮፌሰሮች እና አማካሪዎችም እንደተገኙበት የዓለም አብያተክርስቲያናት ምክርቤት ዘገባ ያመለክታል።ስብሰባው በነሃሴ ወር በጀርመን ለሚደረገው 11ኛው የዓለም አብያተክርስቲያናት ስብሰባ የኦርቶዶክሱ ዓለም የራሱን ምክረሃሳብ የሚያቀርብበት ጉዳይ ላይም ስብሰባው መምከሩን ለማወቅ ተችሏል።ለስብሰባው የቀረቡት ጽሑፎች እና በተነሱት ነጥቦች ላይ ውይይቱን የመምራት ዕድል በዙር ለተሳታፊዎች የደረሰ ሲሆን የኢትዮጵያ ኦርቶዶክስ ተዋህዶ ቤተክርስቲያንም በወከሏት ብጹዕ አቡነ ሕርያቆስ የጣልያን እና አካባቢው ሃገረስብከት ሊቀጳጳስ የቀረበ ሲሆን ብጽዕነታቸውም በተሰጣቸው ሰዓት ስብሰባውን መርተዋል።
ከእዚህ በታች የዓለም አብያተክርስቲያናት ምክርቤት ስብሰባውን አስመልክቶ በስምንት ነጥቦች ያቀረበው ጥቅል ሪፖርት ከስር ይመልከቱ።
Inter-Orthodox Pre-Assembly Consultation For the 11th Assembly in Karlsruhe, Germany, 2022 “Christ’s love moves the world to reconciliation and unity”
====================
1. At the initiative of the World Council of Churches (WCC) and with the gracious hospitality of H.E. Metropolitan Vasilios of Constantia and Ammochostos of the Orthodox Church of Cyprus, delegates of Eastern and Oriental Orthodox churches met at Paralimni, Cyprus, to deliberate upon the theme of the 11th WCC Assembly, ‘Christ’s love moves the world to reconciliation and unity’, in order to provide their theological contribution to the Assembly. The 11th WCC Assembly will be held in Karlsruhe, Germany, from 31 August to 8 September 2022.
2. Since 1983, the WCC has convened an Inter-Orthodox Pre-Assembly Consultation prior to its Assemblies. The purpose of this year’s Consultation in Cyprus was to articulate the Orthodox perspective on the theme and sub-themes of the Assembly, prepare the delegates for their fullest participation, and express their expectations of the upcoming Assembly and life in the WCC and beyond. There were fifty participants, including delegates from twenty Eastern and Oriental Orthodox churches: hierarchs, priests, deacons, professors, lay men and women, and youth, as well as observers and consultants. Keynote speeches by men and women delegates explored the theme and sub-themes from various Orthodox standpoints. The delegates also received information from WCC staff about Assembly procedures.
3. In Orthodox theology, love is of utmost importance. The One God in Trinity in His divine goodness created the world, and maintain, and protects humanity and all His creation with his love. The supreme act of God’s love is the divine economy of salvation by faith in Jesus Christ. Salvation is understood as the re-creation and restoration of humanity and the whole creation.
4. As Orthodox, we are committed to the goal of Eucharistic unity, which has been the vision of the WCC from its initiation. The call for unity, reconciliation, justice, and peace remains our mission today, as our incarnate Lord invites us to abide in His love by keeping His commandments: “You shall love the Lord your God with all your heart, and with all your soul, and with all your mind…and love your neighbor as yourself” (Matthew 22:37-39). In this mission, we join with all Christians, seeking to promote unity, reconciliation, justice, and peace on the basis of Christ’s message and God’s love for humanity and all creation. We are aware these aspirations will be reached only by putting our trust as living faith in God’s love, which is also the basis of loving one another.
5. The meeting took place in an apostolic land (of apostles Paul, Barnabas, and Mark), giving the participants the opportunity to pray together and immerse themselves in the two millennia-old Christian heritage of the island of Cyprus, and also to be informed about the vivid problems and continuing pain that the Turkish occupation has caused to the local population, an occupation that keeps the island divided.
6. The delegation of the Russian Orthodox Church informed the body about the armed confrontation in Ukraine. The members of the meeting had the chance to discuss about the attitude of the local church to this painful situation and shared their deep concerns for the developments in the region, prayed for peace and expressed their hope that the theme, “Christ’s love moves the world to reconciliation and unity”, chosen for the next Assembly period, will be another input that may lead this bled region as well as other wounded places from wars in the world, to peace and overcome problems of division.
7. The delegates approved a report of the Consultation that will be shared with all Eastern and Oriental Orthodox member churches and offered it as an Orthodox contribution to the 11th Assembly for the wider ecumenical fellowship. This report also includes discussions on anthropology, the ecological crisis, Covid-19, and other topics in the context of the Assembly and the life of the WCC.
8. The participants gave thanks to God, the Father, the Son, and the Holy Spirit, for bringing them together in a spirit of love, reconciliation, and unity, and renewed their commitment and common obedience to follow God’s commandments to love Him, to love one another, and to protect His creation, which is our home.
ምንጭ https://www.oikoumene.org/sites/default/files/2022-05/COMMUNIQUE%20-%20of%20the%20Inter-Orthodox%20Pre-Assembly%20Consultation%20%282022%29%20-%20FINAL_1605.pdf
========////============= 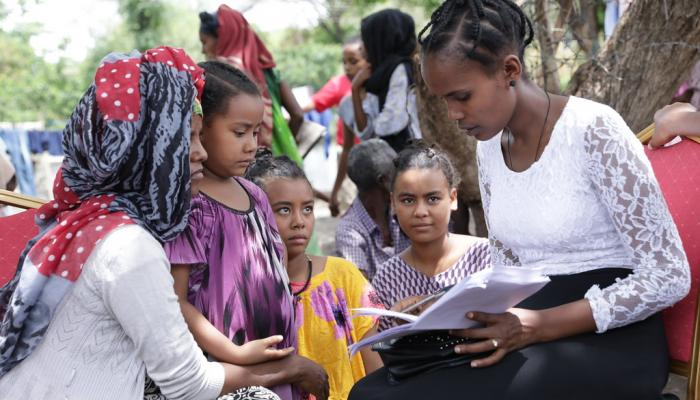 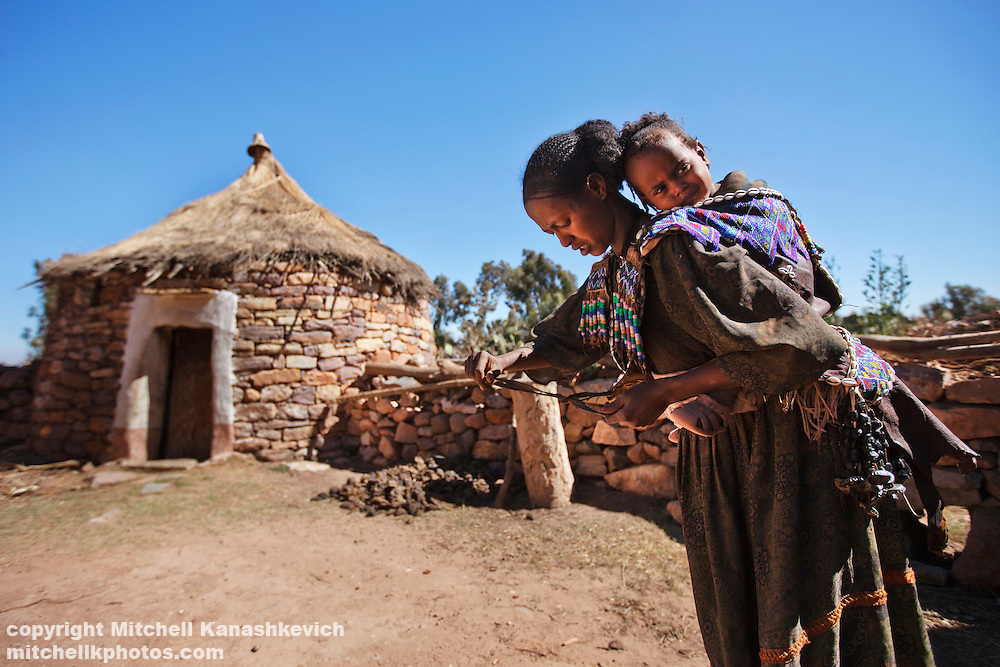 Thousands of parents in the Tigray region in Ethiopia are arrested by TPLF for refusing to allow their children to fight against the Federal Government.
BBC Amharic report on May 4,2022

Thousands of parents in the Tigray region in Ethiopia are arrested by TPLF for refusing to allow their children to fight against the Federal Government.

A native Tigray region resident interviewed by the BBC: said his parents and uncle were arrested for refusing to allow children for TPLF. The young man who asked not to be named for the safety of himself and his family; "There is a law that says at least one person in the family must send and safety receive."

According to this young man, his older brother did not want to take part in this war. "My brother is big. If he wanted to, he could go without my father's permission. But they arrested my father," he said.

He says that because he (his father) did not send his children to the battlefield, he and his uncle were imprisoned. "Two months ago, my uncle was arrested and told to bring his daughter. She is not even 18 years old," he said.

"He has no grown-up children. She's the biggest one in the house. I don't know where they are now because there is no telephone."

According to the young man, the TPLF, which currently controls most of Tigray, used to send people to the battlefield before they could arrest the parents of children who refused to march.

"In the past, there was rape. This has a lot to do with it. Then came the 'if we take parents, they will [fight].In addition to the young man, Kibrom Berha, a member of the regional opposition party, said his parents had been arrested for refusing to fight in the war against the Federal Government.

The head of foreign affairs of Baito and Abay Tigray, Kibrom Berha, told the BBC that his younger sister had been arrested by the TPLF for refusing to participate in the civil war.

"Everyone in our house is in exile. There is only my sister under the age of 18 [in Tigray]. My sister was arrested for saying, 'Why didn't she go to war?' The TPLF, for its part, says there have been signs of arresting parents in the past, but now it has stopped. "Such things were signs at the cadre level, but there is no way to arrest parents in this way. "Whether or not to go to war is a personal choice; arresting a parent for not going to war is not uncommon in the world," said Kibrom Berha.

"My mother is still called Tehlehaimanot. It is very sad. It is something I did not expect. It is unfortunate that this is being repeated in Tigray," he said. Kibrom said that even if the child is not a child, sick parents will be arrested and many people will be detained in schools without trial. Another resident of Tigray told the BBC that there are currently many problems in the region, one of which is forcing parents to send their children to fight. An unnamed resident of the Tigray region for security reasons; "We are being told to donate your children. We have no government," he told the BBC.