''Is This The Beginning Of The End For The Eritrean Regime?''

'GUDAYACHN' Blog is focusing on the horn of Africa political, economical, social and cultural situations. 'Gedab News' (US-based website - 'awate.com') wrote the current pictue of Eritrea. Since Eritrea is not accessible to foreign journalists, it is not fair to undermind such deep-rooted reports.

Please note that the two below photos  are not part of the 'Gedab News'
Is This The Beginning Of The End For The Eritrean Regime?

(Gedab News: Oct.11,2012)
Although Eritrea has been ruled under an undeclared state of emergency for 14 years, recent developments lend credence to the view that the Eritrean regime is cracking under the pressure: two Eritrean pilots defected to Saudi Arabia; the militarization of Eritrea’s civilians has intensified; Ethiopia’s March foray into Eritrea resulted in much higher Eritrean casualties than reported; the “gold boom” has been much more short-lived than advertised; and there is shortage of everything particularly those requiring hard currency.
The Defection Of Eritrean Pilots
This week, as Eritrea’s Foreign Minister, Osman Saleh, was making his case at the UN for the international community to lift the sanctions (Resolution 1907) imposed on his government, Saudi and American intelligence were debriefing two Eritrean pilots who had asked for political asylum. Almost certainly, the Monitoring Group on Somalia and Eritrea, the UN agency mandated to evaluate and report on the Eritrean regime’s violation of UN Resolution 1907, is next on queue to interview the pilots.
On October 2nd, Saudi Arabian Air Force in Jizan intercepted an Eritrean aircraft after it crossed their border, and escorted it to Jizan. The Eritrean plane was piloted by Captain Yonas Woldeab and Captain Mekonnen Debesai. There are now reports that the two asked for political asylum in Saudi Arabia and that the commander of the Eritrean Air Force, Major General Teklai Habteselasse, was dispatched to demand the return of the aircraft.
In countries with professional armed forces, pilots are always considered an elite group because it takes a great deal of skill, training and optimum health to maneuver aircraft. And because they belong to an elite group, pilots develop a tight camaraderie, particularly in nations like Eritrea with a tiny Air Force. The Eritrean president’s son, Abraham Isaias Afwerki, is being groomed to be part of this “elite” group.
So why would the two pilots defect? For a number of reasons, according to our sources. First, because even those in the “elite” cannot escape the suffocating police state that Eritrea has become. Secondly, the Eritrean Air Force is, like the entire Eritrean Defense Force, just an extension of President Isaias Afwerki’s ambition and the pilots are treated like grunts and couriers: transporting gold from Bisha to Asmara; and transporting weapons from Asmara to Somalia. Thirdly, it is due to personal fear for their lives as a result of flying unsafe aircraft. UN Resolution 1907 (and the subsequent Resolution 2023 (2011)) imposed blanket arms embargo on Eritrea resulting in deterioration of two-thirds of Eritrea’s modest capabilities. To circumvent the embargo, the Eritrean regime has been importing entire aircraft parts in cargo shipments and, using Eastern European experts, assembling them in Eritrea. The two pilots who defected were particularly haunted by the crash of an Asmara-assembled-aircraft several weeks earlier.
Intensified Militarization
Since 1998, the Eritrean regime has modified its “National Service” policy, which is supposed to be 18 months of military service, into an indefinite conscription with arbitrary discharges at the whim of the four military commanders who oversee the Eritrean Defense Forces. (Incidentally, the aforementioned Air Force Commander, Major General Teklai Habteselasse, also oversees the Sawa Military Training Camp, the boot camp for all ground forces.) Predictably, the arbitrary discharges have created a massively corrupt system where people with means and/or connections are relieved of military service. This is widely known in Eritrea and, for a regime which claims to be obsessively opposed to corruption, the only conclusion that can be drawn is that it is being “tolerated” to buy the loyalty of the nouveau-riche military commanders.
view of Asmara photo by Jean Robert 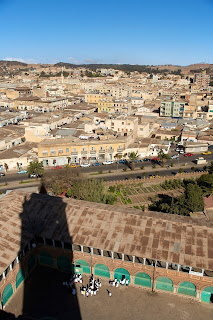 As bad as these conditions are, they got worse: Eritreans who saw no potential for change began to vote with their feet and tens of thousands of Eritreans have been migrating to neighboring Ethiopia and Sudan making Eritrea, on a per capita basis, the source of the world’s highest migration rate. From there, the desperate Eritreans flee to remote lands creating yet another industry: human smugglers who charge tens of thousands of US dollars to either transport Eritreans or to demand ransom after holding them hostage. To add insult to injury, the Monitoring Group on Somalia and Eritrea provided an explanation as to why the Eritrean regime has never once protested the ill-treatment of its own citizens in the hands of Sudanese officials and Egyptian Bedouin tribes: Eritrean government officials, with the approval of President Isaias Afwerki, are directing and profiting from the human trafficking campaigns.
Asmara st.Mary Orthodox church photo
from google earth 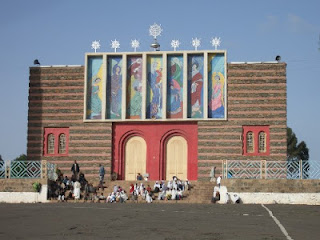 Now, for reasons that have not been explained in any official government directive, the Eritrean regime has intensified the militarization by creating a militia. The militia, made up of women as well as men as old as 70, have been provided with guns (mainly AK-47s), and directed to report to their local party-run offices for regular training. Those who fail to report have been threatened with denial of “government coupons” which are used to buy subsidized essentials (bread, cooking oil, sugar, etc) from party-owned “fair shops.” Those who reported for duty, many of whom are noticeably old, have received camouflage uniforms and assigned to overnight neighborhood monitoring tasks.
Why this reserve has been called up is not clear leaving the people to speculate on whether they are supposed to be a bulwark against a coup or defense against Ethiopian aggression.
Eritrean Casualties In Ethiopian Military Foray of Spring 2012
On March 8 and on March 17, 2012, the Ethiopian army made two incursions inside Eritrean territories. The Ethiopian authorities explained that the first incursion was to attack Ethiopian opposition bases inside Eritrea but denied that the second one took place at all. Gedab News reported at the time that the Ethiopians had not only invaded but were actually occupying Adi Teklai, Sheshebit (in the Badme region) and Renda, Detsen, Alha and Gindab (in the Bada region.) Gedab still stands by that report. Curiously, the Eritrean regime did not file a detailed complaint with the UN.
The reason now appears to be that Eritrea had sustained casualties (killed, injured and prisoners of war) at significantly higher rates than what was suspected. The first clue to this is that on its unofficial information dissemination machine (the so-called “03”, the rumor mill), in its “community centers” and on websites sympathetic to it (regime supporters and Ethiopian opposition websites), it was leaking the “my cousin who is a senior official told me” stories about a large group of Ethiopian soldiers (and foreign mercenaries!) who have been captured by Eritrea. There were also reports about how Eritrea had chased Ethiopian army deep into Ethiopian territory and that it might even be capturing Ethiopian land.
However, by July, family members of the deceased Eritrean soldiers had begun to demand accountability for their missing children. The rumor machine then headed the opposite direction with claims that the Eritrean government would soon announce the names of those killed in action. But before it could do that, the Ethiopian government announced that it released sixty-eight Eritrean prisoners of war through the Red Cross. While sixty-one prisoners were recently returned to Eritrea, seven of them have asked for asylum in Ethiopia.
Economic Crisis
Several weeks ago, at a joint meeting of Eritrean military officers in Sawa, President Isaias Afwerki informed the group that any plans for cost of living adjustments should not factor in proceeds from mining as those revenues have been earmarked to development projects. To be sure, the Eritrean government had always officially played down proceeds from mining activities ever since mineral reserves had been discovered in Eritrea. But, through its non-official channels, it was always talking up the potential of the minerals to improve Eritreans quality of life dramatically.
Now, there is shortage of everything in Eritrea.
Due to misuse and lack of maintenance, the Hirgigo power plant is running at 25% of its capacity resulting in frequent power outages in the capital, and merchants are now supplying their own power generators. The roads are not maintained; the much-advertised “dams” are seasonal and used mostly to create watering holes for livestock. There is shortage of fuel, and the cost of essentials is skyrocketing. The government does not publish budgets, inflation rates, etc and all reports are anecdotal based on cost of sugar, grain, chicken, goat, sheep, etc.
Some suspect that the shortage is purposely designed to keep the population docile. Water supply is not available during day time, but when there is supply a few days a week, the authorities open the valve for a couple of hours anywhere between 2am and 4am. The population sits in front of the tap for the whole night with their water containers and buckets without sleep. If they miss it, they have to go without water. An official was asked why they don’t supply water during daytime instead of denying the population sleep by making them wait for water at odd hours in the middle of sleeping time. The official replied: “we don’t want anyone in the streets during the day. Let them spend the night waiting for water and they can sleep during the day.”


Facing difficulties, the government is revisiting the same strategies it pursued in all previous hardship cases: intensifying contraband trade with Sudan, establishing parastatal dominance in foreign country (this time it is South Sudan), and shaking down the Diaspora Community for “investment opportunities.” The Diaspora has been sold shares in Asmara Brewery (often closed due to shortage of hard currency to import machinery); shares in the National Insurance company; as well as land to build villas (all of which are half-finished and unusable due to shortages of construction materials.) Just in time, the government is “revisiting” its land allocation policy and, for reasons that nobody has explained, selling copies of the country’s “ratified” constitution booklets in Tigrinya, Arabic and English.
While the reports by those who visit Eritrea and return to the Diaspora have been increasingly dire over the years (“nobody is running the country!” “The nation is set on neutral gear, and it Is only gravity pulling it through!” etc) the reports being offered by the returnees from the summer 2012 visit to Eritrea have an element of panic to them. But some Eritreans who have resigned themselves to the Eritrean regime’s serial incompetence and bumbling mismanagement for two decades are using the same medicine they have for years: laughter. A source who was asked to confirm that Major General Teklai Habteselasse was visiting Saudi Arabia interrupted our question to say, “Don’t tell me… he too asked for political asylum?”
For years, the Eritrean regime has been giving signs that it is on its last legs and that the end is coming. Now, it appears that it, too, is sensing it and the fear is that it is going to leave behind a highly militarized population that has no loyalty to anybody or anything but his safety and security. In short, the fear is that the Eritrean regime is destroying the state.
source:-http://awate.com/is-this-the-beginning-of-the-end-for-the-eritrean-regime/
By ጌታቸው በቀለ ዳምጠው / Getachew Bekele Damtew Getachew Bekele Damtew at October 19, 2012 3 comments: