GERD is meant to connect millions to power grid. Scholars’ in Norway present papers on GERD 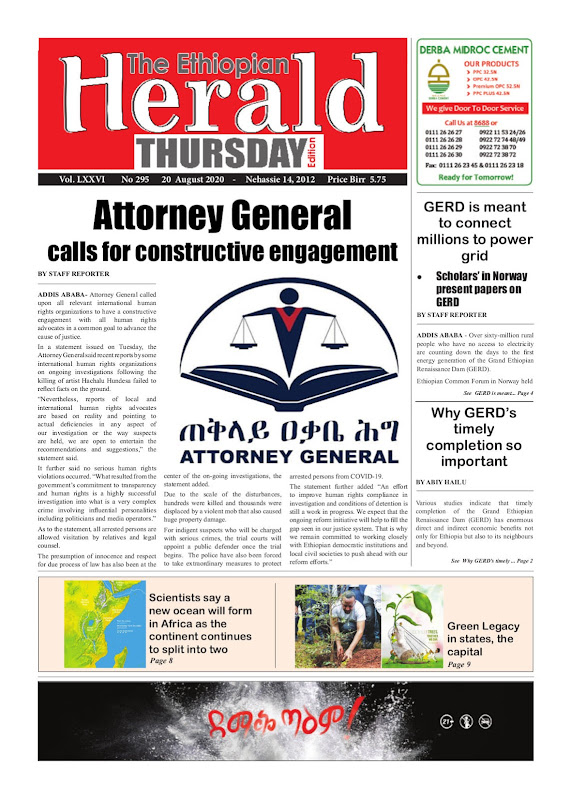 The Ethiopian herald News Paper
August 20 , 2020
BY STAFF REPORTER
Addis Ababa
**************************
(EPA)
ADDIS ABABA - Over sixty-million rural people who have no access to electricity are counting down the days to the first energy generation of the Grand Ethiopian Renaissance Dam (GERD).
Ethiopian Common Forum in Norway held a discussion and paper presentation on GERD last Saturday in cooperation with the GERD Support Group in Norway.
In his keynote speech, Ethiopian Ambassador to Sweden and other Nordic countries Diriba Kuma said this in a forum envisaged to inform the Norwegian government, officials, journalists, and the Ethiopian community in Norway.
Diriba underscored that Abay (the Nile) touches 70 percent of the livelihood of the population of Ethiopia and represents 2/3 of Ethiopia’s surface water potential, while over 70 percent of energy generation potential is in this river.
Indicating that 25 million people of Ethiopia are living under the poverty line, and 65 million people of Ethiopia have no access to electricity, he said: “Our citizens are waiting for the completion of the dam.” The government of Ethiopia has taken practical steps to negotiate and discuss all important matters since the inception of the project as these are the way out of the dispute, he said, adding that the GERD has no significant impact on the flow of Nile to downstream countries.
He also expressed a strong belief that under the auspicious of South African President Cyril Ramaphosa’s leadership the three countries would resolve the outstanding issues. Elaborating on the rationale of the forum, Dr. Mulugeta Bereded Zelelew, one of the paper presenters, said Egypt’s attempt to internationalize the GERD project with massive media coverage has been with full of bias and misleading information.
Group of GERD support Team in Norway did analysis into the media coverage, and decided to lay bare Egyptian fabrications with scientific evidence, he added. In his paper, entitled:GERD Project and its Significance for Ethiopia and the Region, he refuted Egyptian claim which is presenting Ethiopia as it has abundant rainfall arguing that the rainfall in Ethiopia is erratic and rushes to the rivers due to the nature of the topography. Hence, there is little time for the water to infiltrate into the soil and remain as residual moisture for sufficient time. It is to be noted that the major rivers of Ethiopia are trans-boundary.
Under normal rainfall year, as much as 5 – 10 million or more Ethiopians are chronically food insecure, he said, adding that 80-85% of the total volume occurs during the major rainy season and water storages are necessary to prolong water availability. Concerning the view that GERD is “an existential threat” to downstream countries of the Nile, he said: “Historical records thought us that Egypt and Sudan which have high storage capacity per capita have more resilience to drought management.”
In severe multi-year droughts, a basinwide drought management plan is required to optimize the competing water uses in the three countries and the three countries should take a shared responsibility to mitigate drought, according to him.
For his part, Dr. Admasu Gebeyehu, Professor of Practice in Water Resources Engineering,indicated that the great majority, 92.4 percent, of the share of energy supply is waste and biomass. He said the share of oil and hydropower is 5.7 percent and 1.6 percent respectively.
The bulk of energy source, 98 percent, in Norway is electricity production from a renewable energy source, he said, noting that Norway is in a unique position in the global perspective while Ethiopia is also in the same position in an African perspective with regard to hydropower potential.
The difference between Ethiopia and Norway is, Norway has gone a lot in the production of energy while Ethiopia has started going through the same path, he added.He also put the contribution of Ethiopia to Nile which stands at 77 BCM or 86 percent of the waters of the Nile.
However, his analyses have proven that Ethiopia’s water storage is insignificant as compared to Sudan and Egypt. Egypt has the Aswan High Dam with a storage capacity of 149.5 BCM while a series of dams in Sudan have boosted the Sudanese storage capacity.
Senior Ugandan Water Engineer Dr. Emmanuel Jjunju (PhD) also presented his work titled: ‘Victoria And Albert Nile Countries’interests On Nile Water Resources’. Jjunju touched up on issues ranging from colonial agreements to the recent basin-wide document, the Cooperative Framework Agreement (CFA).
He said almost all Nile Basin countries are at low level in human development with an exception of Egypt. If you want to take all these countries to the level of Egypt, for instance, it requires the countries lot of work. And it cannot come by without energy.
As electricity is a very big driver of development, be it education, telecom or what have you, countries ought to do a lot in this regard.
Mentioning that hydropower is the most feasible and affordable source of energy to the countries such as Uganda, Burundi and Kenya, he said most of the hydro potential of Uganda, 6,950 MW, is within the Nile basin.
He added that his country, Uganda, go to expensive alternative sources of energy that cost 0.16-0.20 USD cents/ Kh which is not really affordable. The benefits of GERD to downstream countries was discussed thoroughly with the presentations of scientific evidence, it was learnt.
================////============
By ጌታቸው በቀለ ዳምጠው / Getachew Bekele Damtew Getachew Bekele Damtew at August 21, 2020