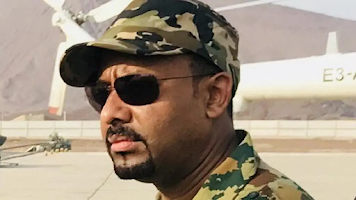 Ethiopian Prime Minister Abiy Ahmed (Ph.D.) is one of the most genius, courageous and intellectual leaders that Ethiopia has ever had. His multi-dimensional profession is so tremendous. He is a graduate of Information Technology (including computer programming and Artificial Intelligence), Military Science, Intelligence Security Science, Conflict Resolution, and Complex Military Communication. The Prime Minister served as the UN Peacekeeper army in Rwanda. He is the founder of the Ethiopian Information Network Security Agency and Ethiopian Innovation minister. He was a participant in the Ethio-Eritrean war at the end of the 1990s. He is also the initiator and successfully solved one of the key conflicts of our world, which is the Ethio-Eritrean conflict. As a result, he won the 2019 Nobel Peace Prize.

Today, the Prime Minister confirmed how far he can go to destroy the anti-Peace and terrorist Tigray People's Liberation Front (TPLF). His Excellency must be awarded the Nobel Peace Prize for the second time for going to the front to fight anti-peace terrorists.

Here is the English translation of the Prime Minister’s message before he just leave to lead the fight with anti-Peace and the terrorist TPLF at the front.

We have a history of preserving the name of “Ethiopia”!

Dear children of my country,

Ethiopia is a country that has maintained its dignity and independence through the bravery and sacrifice of its children. This is well known by both friends and enemies. They saw her invincible arm trying to cross the border. Those who are eager to activate it have returned empty-handed. Ethiopia knew in advance that she would give the right lesson to those who betrayed her. Her millennial freedom and sovereignty were not bestowed by grace. It is impossible to maintain freedom without paying a price; The name of freedom, Ethiopia, has been paid for with blood, and Ethiopian heroes have died.

Our fathers, whom we know to be historically diverse, have differing levels of government and ideology; They differ in their views on rights, justice, and equality. For Ethiopia, however, there was no difference in territorial integrity, independence, and sovereignty. Despite their differences in language, ethnicity, and ethnicity, their unwavering determination unites them. No matter how far apart their personal interests are, being Ethiopians comes first when a common enemy comes to attack the country.

In the past and in the present, the needs of each and every one of us are at the bottom of our lives. We all are not above Ethiopia. We want to have a country that belongs to all of us, that is free and fair, that is called the world of its greatness and freedom. With great ambitions for Ethiopia; Wanting our country to be upright; Over the past three years, we have done our best. We are fighting to turn our politics from killing to fighting in ideas. We have tried to get everyone who is wandering in the country to say that Ethiopia belongs to all of us. We take the good from the past and move forward with forgiveness. We have opened a new chapter: We have done our best to translate what we promised to tear down the walls of division and hatred and to build a bridge of national brotherhood.

To revitalize the economy and bring about structural change; To improve our judiciary, to improve our human rights record; We strive to make our foreign policy principle neighborly. In the meantime, we are strong as a people. We are as weak as men. We dreamed as a man, and as a man, we dreamed. But for the sake of Ethiopian unity, the dignity of Ethiopia, and the greatness of Ethiopia, we have never been inclined.

Ethiopia is an attractive country. Tomorrow is a better day than yesterday. Suffering is an ongoing process. We are going through this ordeal. Ethiopia will win. We are now in the final stages of saving Ethiopia. Our enemies are attacking us both from the outside and the inside. On the one hand, our historical enemies have given a scepter of doom to Ethiopia, which can only grow by its own will and in its own way. If Ethiopia rises and wins in an African way, it will never be the same again. They have used all sorts of evil weapons to obstruct this African way. Our external and internal enemies have set out to build their strength against Ethiopia's weakness. Ethiopia's interest is to carry, not to abandon; That is why we have made our foreign policy a priority for our neighbors.

It is time to sacrifice the country. From now on, I will march on the battlefield from tomorrow onwards to lead the defense. All of you who aspire to be one of Ethiopia's most admired children, stand up for your country today; Let's meet face to face. The rest of us will cover the gaps created by our campaign. State and federal leaders, who are not in the lead, are doing their best for development and administration more than ever.

As adults wisely guard their environment, elderly mothers and fathers pray, everyone will work together to ensure Ethiopia's victory. This is no longer a time to sit back and relax. Let's do it ourselves. It does not come from Ethiopia better than we do. The name Ethiopia is the name of the winners; It is a symbol of freedom. I have no doubt that my generation will pay the price for its victorious name and the symbol of freedom and will print Ethiopia and Ethiopianness in gold.

May Ethiopia be honored by the efforts of her children.

God bless Ethiopia and its people! 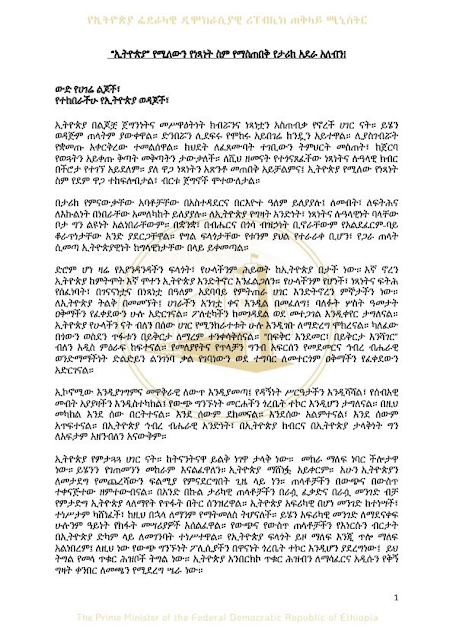 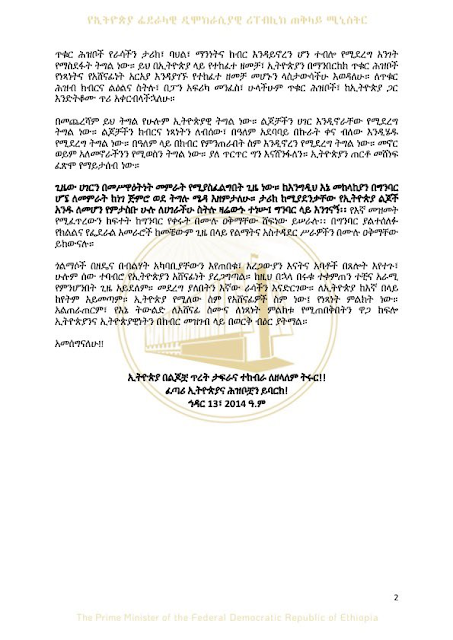