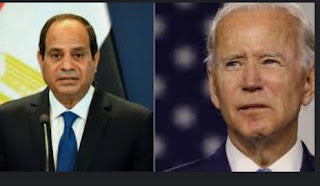 The text of the following statement was released by the Governments of the United States of America and the Arab Republic of Egypt on the occasion of the U.S.-Egypt Strategic Dialogue.

Secretary of State Anthony J. Blinken and Minister of Foreign Affairs Sameh Shoukry led the U.S.-Egypt Strategic Dialogue on November 8-9, 2021, in Washington, D.C. The two sides noted the coming centennial of U.S.-Egypt diplomatic relations in 2022 and reaffirmed the importance of the U.S.-Egypt strategic partnership and identified areas in which to deepen bilateral and regional cooperation, including economic and commercial affairs, education, cultural issues, consular affairs, human rights, justice and law enforcement, and defense and security. They also agreed on the importance of holding this dialogue on a regular basis.

The United States and Egypt reaffirmed their steadfast commitment to the national security of both countries and to the stability of the Middle East. Egypt commended the U.S. role in economic development in Egypt and its supply of defense equipment, and joint cooperation to reinforce Egypt’s defense capabilities. The United States expressed its appreciation for Egypt’s leadership in mediating solutions to regional conflicts, notably in promoting peace and ending violence in Gaza.  Regarding the Grand Ethiopian Renaissance Dam (GERD), the United States reiterated President Biden’s support for Egypt’s water security. The United States and Egypt called for the resumption of negotiations over an agreement on the GERD under the auspices of the Chairperson of the African Union, in line with the Presidential Statement of the United Nations Security Council of September 15, 2021, and the 2015 Agreement on Declaration of Principles. The United States and Egypt stressed the importance of holding elections in Libya on December 24, and backed the action plan of the Libyan [5+5] Joint Military Commission for the removal of all foreign forces, fighters, and mercenaries. U.S. and Egyptian counterparts also discussed Sudan and resolving regional conflicts and humanitarian crises in Syria, Lebanon, and Yemen, and agreed to continue high-level consultations on Middle East and African issues.

The two delegations reaffirmed their shared commitment to broaden and deepen bilateral economic and commercial cooperation, and to cooperate closely on climate issues. They shared ideas on increasing investment in their respective economies, providing more opportunities for their people, and combating the climate crisis. The United States welcomed Egypt’s nomination by the African Union to host COP27 in Sharm el Sheikh and provide leadership as the incoming COP27 presidency in advancing global climate ambitions. The United States commended Egypt on its progress in developing green energy and intentions to pursue ambitious climate targets. The United States and Egypt announced the launch of a high-level Joint Economic Commission, formation of a joint U.S.-Egypt Climate Working Group, plans for a green economy trade mission, and a new USAID trade reform program. Both sides also expressed intention to sign a Memorandum of Understanding (MOU) between EXIM and the Egyptian Ministry of Finance.

The United States and Egypt reaffirmed their commitment to bilateral defense cooperation to meet current and future challenges, including in the field of counterterrorism and border and maritime security. Building upon the successful completion of the 32nd U.S.-Egypt Military Cooperation Committee, and the multinational exercise Bright Star 2021, Egypt reaffirmed its commitment to active participation in the Combined Maritime Forces. The United States noted the significance of Egypt’s recent $1 billion nationally funded contract to refurbish Egyptian Apache helicopters, supporting hundreds of U.S. jobs and increasing Egyptian readiness.  The United States and Egypt committed to discussing best practices in reducing civilian harm in military operations.  Both sides also noted the recent State Partnership Program between Egypt and the Texas National Guard as an opportunity to increase cooperation.  Both sides also noted the signature of the Acquisition and Cross Service MOU, which gives flexibility to bilateral logistic support.

The two countries reaffirmed their commitment to enhancing diplomatic and consular cooperation.

Egypt and the United States announced their intention to strengthen judicial and law-enforcement cooperation to combat transnational crime by sharing, as appropriate and consistent with international legal standards, evidence and information used to investigate and prosecute these crimes.  The United States and Egypt signed an MOU intended to facilitate and promote expeditious cooperation under their Treaty on Mutual Legal Assistance in Criminal Matters, which entered into force on November 29, 2001.  The United States and Egypt agreed to continue to strengthen educational and cultural cooperation. In that connection, participants discussed the expansion of people-to-people ties across educational, cultural, scientific and environmental exchanges and collaboration on programs such as the Fulbright, International Visitor Leadership, and U.S. Speakers programs. In addition, both sides emphasized the importance of cultural heritage protection and preservation through the framework of the U.S.-Egypt Cultural Property Agreement. The two delegations reaffirmed their commitment to scientific cooperation through the U.S.-Egypt Science and Technology Joint Fund, which was strengthened by the recent renewal of the U.S.-Egypt Science and Technology Agreement. The United States and Egypt expressed commitment to sign an extension of their MOU that strengthens Cultural Property Protection and to launch discussions for an action plan.