The current Biden Administration foreign policy is in crisis. It has missed its consistency and clearly stands against the interest of the US. The two typical examples are its non-directive relation with the European Union and with Africa, especially recently with Ethiopia, which can be mentioned. The role of the US in the modern world’s way of thinking and technological advancement is so significant. This is not the sole effort of America but it is also the contribution of migrants' minds from all over the world. Therefore, everybody cares and is concerned for the US.

Here is another piece of evidence. The State Department is planning to have an interview with an ordinary Pro-Terrorist TPLF YouTube called UMD Media. Look! This particular YouTube is selected only for being Pro-TPLF. It does not even have many followers. It is an ordinary and can never deserve to talk with the State Department Spokesperson unless there is back chair relation disregarding the normal press procedure of the State Department.  US Taxpayers and FBI need to stop such a kind of ''below standard'' approach of the Biden Administration that is not less than even to stand on the National Interest of the US Government and the People.

Let me say again. Now it is time for the US taxpayers and FBI to investigate the relationship between the State Department and the Terrorist TPLF networks. I am talking about the National Interest of the US Government. When you investigate the background relationship between Terrorist TPLF networks and the State Department, you will get how the US National Interest pushed from 125 years of Diplomatic relations with Ethiopia.

Last but not least, let's have one simple but big question.

How did the State Department go down and plan to make an interview with an ordinary Pro-Terrorist TPLF YouTube? What personal relations are going on at the back of US National Interest?

Here is the poster by the YouTuber to make an interview with State Department's spokesperson. 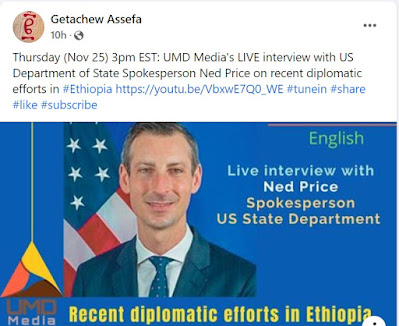