Is there any evidence that President Biden's Administration is not involved in initiation and implementation of Sudan's Coup d'etat? Ethiopians should learn from Sudan's lesson. 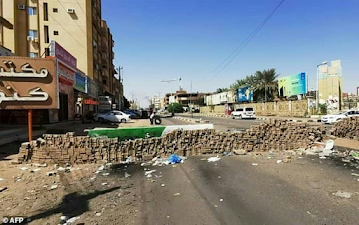 ‘‘Sudan’s military leader has agreed with the United States on the need to speed up the formation of a new government...’’

The end of October was one of the black weeks in Sudan. The democratic transition process was officially interrupted by a coup d'etat led by Lt. General Abdel Fattah al-Burhan. On October 25,2021 the General dissolved the civilian Government led by Prime Minister Abdalla Hamdok. On the same day the PM was detained and the nationwide state of emergency was declared. However, the People of Sudan stood up soon and protested the military action against the transition process to civilian Government.

Surprisingly, the US Government and UN express their ‘‘very concerning’’. The UN spokesperson from New York said ‘‘we want to see a return to the transition as quickly as possible...we want to see the release of the prime minister as well as all other politicians and leaders that have been detained.’’

In the next few days, the Khartoum residents' protest continued.However, there is no improvement from the new military leaders' side. It continues to control all political, economic and social sectors.Today, November 11,2021 the de facto leader G/ Abdel Fattah al-Burhan named a new transitional council. Following this announcement, today people protest the new decision of the G/Abdel Fatta.

On this Saturday about One-million Sudanese are expected to go out on the capital's streets demanding to back Sudan to the transition process of democratically elected civilian Government. In all these situations the voice of President Biden Government is becoming soft towards the New Military Government of Sudan. The state department press releases are decreasing.

Now the basic question : Is there any evidence that the Biden Administration is not involved in initiation and implementation of Sudan's Coup D'etat?

In this discussion the current Egyptian Government stand regarding Sudan's internal issue is quite known. Egypt Government thinks the Military officials are more smooth to work for the Egypt National interest. Therefore, it is difficult to take out the role of President Biden’s in Sudan’s coup d'etat. The tone of the Biden Administration towards the General Abdel Fattah al-Burhan is already changing. The Biden Administration did not feel responsibility for African's futurity. It's failed Foreign Policy to Africa is based on the principle of '' to ensure US Interest at the expense of Africans''. That means there should not be any confusion among the Sudanese People. The Biden Administration plays a dual face, both to the transitional Government process actors and to Sudan Coup d'etat members.

The bad thing is that the US biased stand on Ethiopian internal issues is also another attempt to destabilize the Horn of Africa. The United States is pushing Prime Minister Abiy’s democratically elected Government to talk with the Terrorist TPLF, is for nothing but to empower the dying ethnocentric and brutal regime again.

It is believed that currently, the Biden Administration realized that this is possible only 'on the dead bodies of Hundred-Million Ethiopians'. Ethiopian determination and clear message to the Biden Administration was passed last Sunday in Addis Ababa, the capital of Ethiopia, through a huge demonstration about a million Ethiopians participated.However, it is not possible to say, Egypt and the Biden administration, will not attempt similar regime change in Ethiopia. That is why this week’s flow of fake news on Ethiopia from the western media was shamelessly spread all over the world.

According to one independent research, about 72 News regarding Ethiopia were released with in some hours in the week end. All News were from the main Global News channels of the western world. The bad thing is that almost all were fake News on Addis Ababa, Ethiopian capital. Even if they presented in different titles and approaches, the fake news was as if Addis Ababa was surrounded by the Rebel groups.So it is time now Sudanese people to learn from Ethiopia and vice versa Ethiopians should learn from Sudan's lesson. No foreign intervention! African problem can be only solved by African solution.