The distributors of Fake News on their tweeters are also 'analysts' on Ethiopian current issues on the western media. 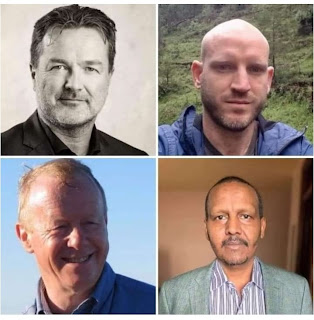 Kjetil Tronvol,William Davison Rashid Abdi and Marin Plaut
(from Top - round Clockwise)
👉 Non-academic and Irrational but pure biased,pro-TPLF and war promotors on Ethiopia commentators will not deserve the International media.

👉They are spoiling Ethio-US and Europe's Historical relationships.

As an active follower of the Ethiopian and the Horn of Africa Political, Economical and Social Affairs and blogger of Gudayachn, I read the above posted four individual's tweets on Ethiopia. Many Ethiopians know them well with their flow of tweeters which focuses on Ethiopia's current issues. Marin Plaut, Kjetil Tronvol, Rashid Abdi, and William Davison are the four known Fake News Tweeters regarding Ethiopia. I think it is possible to say that they are also spoiling Ethio-US and Europe's historical relationship.

Many Ethiopians are seeing them as the ‘faces of sabotage’ that reflects the US and European Foreign Policy formulators. Due to their non-responsible tweets and analysis on the Western media, the Political, Economic, and Social environment of Africa is misinterpreted. It is quite clear that People-to -people historical relations need great care. However such Individuals misbehave and characters for some sort of individualistic interest could have a huge catastrophic danger on the relationship between the North and South. Here it is possible to present a deep-rooted analysis of how can it happen. But it is not an objective of this particular article.

These people are well-known Pro-TPLF (Tigray Peoples Liberation Front), biased to its ethnocentric ideology, attempting to advise TPLF on their tweets and continue to tweet fake news on Ethiopia and Africa. The bad thing is that the western media's views and analysis programs are referring to them to share their biased ideas. The ways they analyze the Political, Economic, and Social environment and current issues of Ethiopia are ‘square one’. That means non-academic, full of hate, and only observed from the TPLF point of view.

Here below I share some of their tweets in the past few months.

Sometimes, his bare wishes were posted as news. This had never happened. It is pure Fake News

Fake News for Martin is as simple as drinking a cup of coffee. There is no road cut.

Africa as a continent is also targeted.

Rashid even call TPLF spokesperson as his 'Uncle' 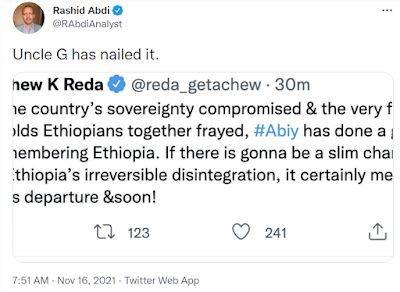 To magnify and multiple ethnic politics

Strategic expert? or advisor for TPLF?

Is he an independent analyst or an advisor and 'master mind' for TPLF operation in Ethiopia?

From the above sample tweets, anyone can understand how far they are going to assist the Terrorist group of TPLF by pure propaganda, Fake News, and sometimes by providing some tips to make sabotage against Ethiopia and Africa.
Now here is the message to the Western world as a whole. The long-aged historical relationship between Ethiopia and Africa on one side and the USA and Europe on the other side is spoiling due to the above-mentioned individuals Fake News and negativity hidden under the name of analysts. Currently, Ethiopians and Africans are looking at the Western world in the eyes of these individuals. Here I am trying to be softer as if there is no driving power behind the back of the mentioned individuals. However, it is not bad to say - let us give a chance for the investigators and historians to disclose in the future the unknown reasons that are driving them to spoil the North-South relationships. But for a time being, it is possible to say, if the western world has a plan to improve its relation with Ethiopia and Africa as a whole, it is vital to cease from giving any chance to the above-mentioned individuals in any International media to comment on any issue of Ethiopia and Africa. Non-academic and Irrational but pure biased,pro-TPLF and war promotors on Ethiopia commentators will not deserve the International media. In fact, the choice is yours. If you ignore this notice, no doubt that Africans' grand revolution to resist the western provocation of indigenous Political, cultural and Economic heritage of Africans or Ethiopians will come soon.
===================///===========