It was over three months that unconfirmed news was flowing from Sudan on the presence of secret training military camps in Sudan and trainee were planning to destabilize the security situation of western Ethiopia.The most dangerous content of the news explained the training centers were full of TPLF army that was participated in Maykadra genocide that kills about one thousands innocent Amhara. In the last two months, the news was confirmed by Satellite photos and intelligence sources indicated the TPLF former soldiers and actors in Maykadra genocide are training in Sudan military camps secretly. The Ethiopian Government has also complained that refugees from Tigray Region, Ethiopia to Eastern Sudan were not all genuine refugees. Rather, genociders were also there under the cover of Refugee status. Two months ago, Ethiopian PM Abiy Ahmed (PhD) also mentioned this situation in his reply to the questions raised by the Ethiopian Parliament members.In his reply, he emphasized as he did not think that all were genuine refugees but there are reliable information Mycadra genocide actors were also registered as refugees within the Camps located eastern Sudan.# Sudan and the UNHCR Sudan Operation, on the other hand, did not show any effort to solve such a security and legal problems related to the refugees genuine status.Instead Sudan could get more funds from UNHCR and International aid Organizations. According to the Office for the Coordination of Humanitarian Affairs (OCHA) relief web March 2,2021 report, flexible funding from Germany, Norway, Switzerland, the UK and the US has enabled WFP to divert US$5.2 million from other humanitarian programmes in Sudan towards the immediate response to refugees. On the other hand, WFP Sudan has also received USD 800,000 from Japan and Euro 15,000 from Andorra for the refugee response in eastern Sudan. After all this fund, WFP Sudan also requested additional USD.121.8 million. It is quite clear that,currently,the east Sudan refugee camps are continuing to be a security problem to Ethiopia. Today September 1,2021 news heard from Ethiopia could confirm as there is some sort of anti-Ethiopia movement, lead by ‘TPLF Sudan wing’ that might get ''the blessing of'' some UNHCR Sudan operation workers. 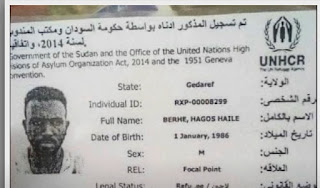 According to Amhara region President, Agegnehu Teshager’s Tweet in Amharic (see at the end of this page) this evening mentioned - among the captured armed former TPLF soldiers in their attempt to invade Ethiopia standing from Sudan, were holding the UNHCR Identity Card under the status of refugees. This is a dangerous approach for both the Sudan Government and the UNHCR against Ethiopia’s security and the horn of Africa as a whole. A clear explanation is needed from both Sudan and UNHCR about this particular illegal action. If not, Ethiopia may be obliged to bombard the military training centers in Sudan which are providing military training toTPLF’s Genocider soldiers. Because, Now,Ethiopia can confirm as the refugee camps are full of criminal TPLF sodiers who have been active participants in Maykadra genocide.
Here is the Amharic tweet of Amhara Region President, Agegnehu Teshager, as of Sep.1,2021
In his Amharic tweet said
'' Today Extremist power comes from Sudan direction which plan to capture SHNFAN, beaten seriously. Many TPLF armed men are killed.These TPLF armed men hold UNHCR ID. I am  always proud of our courageous soldiers.' 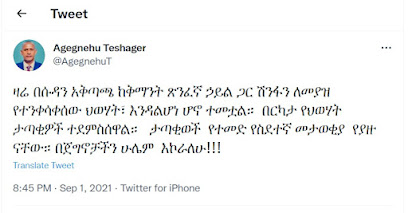