The current US Government is complicating the Horn of Africa problems. The three huge mistakes in today’s US Secretary of State Antony J. Blinken spoke with Sudan Prime Minister Abdalla Hamdok. 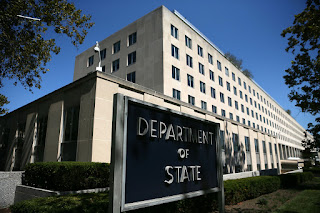 The Nine lines press release from the US Secretary of state Antony J. Blinken states as the Secretary spoke today with the Sudanese Prime Minister Abdalla Hamdok. It also mentioned ‘’the discussion was shared concerns over the expansion of armed confrontation in the Amhara and Afar regions of Ethiopia, the deteriorating humanitarian situation in the Tigray region, and reports of Eritrean troops re-entering Ethiopia…impact regional stability.’’

Here is the full statement of the Press release –

‘’Secretary of State Antony J. Blinken spoke today with Sudanese Prime Minister Abdalla Hamdok to discuss shared concerns over the expansion of armed confrontation in the Amhara and Afar regions of Ethiopia, the deteriorating humanitarian situation in the Tigray region, and reports of Eritrean troops re-entering Ethiopia, all of which impact regional stability. Secretary Blinken and PM Hamdok agreed to encourage all parties to enter negotiations toward a ceasefire, to engage in an inclusive political dialogue to preserve the unity and integrity of the Ethiopian state, and to allow full humanitarian access to those in need.  The Secretary and the Prime Minister also discussed progress in Sudan’s democratic transition and ways to expand U.S.-Sudanese relations.’’

According to this press release US Secretary of state makes the following huge mistakes that are clearly visible from the press release.

The US Secretary of state is not speaking with the perfect actor of the situation. Why he did not discussed with the Ethiopian Foreign Minister or PM Abiy who have the first hand capacity to handle the situation? Why he prefer to talk with Sudan PM on Ethiopia internal issue. It is quite clear the US current Government is pushing the Sudan Government and Military to make some sort of interference in Ethiopian internal case. The US Government never released a press condemning the Sudan invasion of the territory of Ethiopia for the last 8 months. This is not by chance. It is a clear indicator that the US Government is at the back of Sudan (the immediate back Egypt is there also) in her all 'touches the red line' of invading  Ethiopian territory.

Egypt military is almost fully dependant on the US military assistance and personal trainings. Egypt and Sudan were on three round military trainings for the last 12 months. The last military training was titled ‘The Nile Guard’. All these situations were part of the provokes against Ethiopia. Today US Secretary of state talks with the Sudan PM instead of discussing and looking for solutions with Ethiopian authorities means a lot in diplomatic words since Ethiopia and US over a Century official diplomatic relation is alive.

The recent press releases, speeches and articles came out from the US Government are not curious for its political words, diplomatic relations, even the integrity and Sovereignty of Ethiopia. Using Tigray region militia as ‘’Tigray Defence Force’’ and counting the regional militia of Amhara and other regions of Ethiopia local militias as if they are an independent army of certain nations are a common but seems intentional flashes seen from Washington side. This is a dangerous outlook and not less than from provoking and interfering in a very internal issue of Ethiopia.

In today’s press release also the US Secretary of State mentioned the local militia of Amhara and Afar putting in the level of other country national army. For example, when US talks about the withdrawal of the Eritrean army from Tigray, the Amhara and Afar militias withdrawal  issue is also mentioned together. This is as if the Amhara and Afar local militias have equal status to other country’s army, like Eritrea, US mentioned to leave from their own land of country. This is nothing but to say the California state police can not make any law enforcement in Washington D.C.

Both Amhara and Afar region militias, whether they go to Tigray or Oromia, they are moving within their own land and territory. But United States attempt in her press releases and officials’ opinion shares to Journalists, they try to dictate where Ethiopian army and militia suppose to go and back. This is a very dangerous motive that some US officials are developing the outdated ‘colonial mind’. It will not also bring peace to the Horn of Africa. Other than more complication.

In general, the current US Government is complicating the Horn of Africa problems rather than looking for the necessary solutions. It is biased and seems to repeat the same mistakes that the former US Government’s made in Syria, Libya and Afghanistan. As far as I understand my own birth country, Ethiopia, all previous wrong strategies applied in Libya, Syria and Afghanistan can never be applicable in Ethiopia. Supporting faction groups and undermining the legally elected Governments might have been applied in those countries. But it can not be in Ethiopia. This is quite a different land, over 3000 years non-interrupted statehood history and unique deep-rooted culture with resilience unity that is not easily visible,penetrate and predictable. History in the future will show us all.