Breaking News - Ethiopian National Defence Force will liberate Mekelle. People in Tigray are so eager to see the National Army and return to normal life. 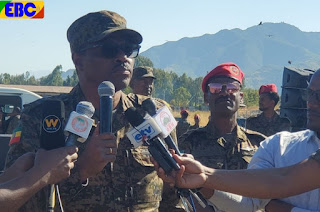 It was on November 4/2020, that Tigray People's Liberation Front (TPLF) attacked the Ethiopian National Defence force’s North Command in Tigray province in Ethiopia. Since then TPLF attempted not to lose its military and political bases, invaded both Amhara and Afar regions, and did so many atrocities on civilians. However, in recent weeks the situation has reversed. ENDF and the popular forces united and cleared TPLF from all areas of Afar and most areas of the Amhara region.

The most latest news, regarding the law enforcement campaign of the Ethiopian Government, is the ENDF will advance to Mekelle, the capital of the Tigray region, and liberate the people from the terrorist group. TPLF is officially categorized as a terrorist group by Ethiopian National Parlament.

Lt.Gen.Bacha Debele said to the army gathered to celebrate the completion of the First level of campaign against TPLF, that the Ethiopian Ground and Air Force members have proved to be the sons of the Destiny of Ethiopia and the Drones of the Earth. The Chief of Defense Staff's last statement in Amharic was approved as the Army will liberate Mekelle. Here was his statement ''Burial of the TPLF terrorist group continues to the end we are announcing the great victory news in Mekelle''.

Reports from Mekelle are showing that the people of Tigray are so eager to see the arrival of the National Army at Mekelle and free from TPLF brutal rule and back the people to normal life. Currently, TPLF  does not have any real functional administrative structure in Tigray. However, the rebel groups' informal command group has controlled some of the rural areas and towns. Therefore, the people of Tigray are so tired of living in an insecure environment. Now, it is proved that the ENDF will liberate Mekelle from the terrorist TPLF group.