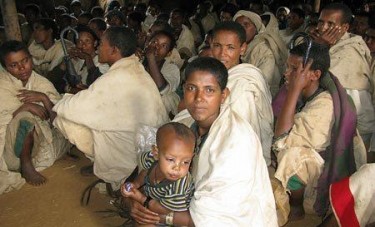 Thousands of ethnic Amharas in western Ethiopia are being expelled en masse from the country's Benishangul Gumuz region, where many have settled, in what some are condemning as a campaign of “ethnic cleansing“.
Ethiopia has been divided into nine ethnically based and politically autonomous regional states and two chartered cities since 1996. The Amhara people, reportedly including children, pregnant women, and the sickly, are being uprooted to a rural area of Ethiopia's Amhara region, which contains their historical homeland.
Human rights advocates say the deportation is illegal according to Ethiopian and international law. Ethiopian authorities have maintained that these claims are unsubstantiated, saying that they have been moving and resettling indigenous and local farmers in the name of villagization programs.
This isn't the first time Ethiopian officials have forced Amhara people to move to another region. A reported 22,000 Amharas were evicted from southern Ethiopia and their homes confiscated in 2012.
A report by Ethiopian Satellite Television in March 2013 and made available on YouTube [amh] quotes opposition party leaders condemning the eviction.

Many Ethiopians are opposed to the government policy of the rural population's mass eviction. An online petition, demanding the government stop the resettlement campaign, had 1,919 signatures at the time of this post's publication on April 11, 2013.
The petition page, which is addressed to Dr. Chaloka Beyani, the UN Special Rapporteur on the human rights of internally displaced persons, and many other Ethiopian government high officials, reads:

According to the information that I have, the eviction is poorly organized and is marred by several cases of human right violations. This petition is in protest of this eviction and is intended to get the plight of these voiceless Ethiopians to the attention of the Ethiopian government and international rights organizations. Please sign the petition and invite your friends to sign as well. This is the least we can do to show our solidarity with Ethiopians who are being victimized by a misguided and irresponsible policy.

Its my view that the mass eviction at this time has well calculated political agenda and is being hatched by the real power holders. By instigating attack on vulnerable Amharas who reside outside their regional state, the regime would like to stir ethnic victim-hood sentiment. This is meant to force Amhara political leaders to resort to open ethnic partisan advocacy, which would undermine their pan-Ethiopianist narrative. What does the regime benefit from this?
Since the 2005 election, the TPLF [Tigray People's Liberation Front, one of Ethiopia's political parties and the real dominant player in Ethiopia politics although the ruling party is Ethiopian People's Revolutionary Democratic Front (EPRDF)] has been trying hard to transform its ethno-nationalist narrative to that of statist nationalism. That is it wants to justify its continuous rule by presenting itself as guardian of the Ethiopian state and its historical legacy. However, before it can achieve that, it has to displace the previous claimant–the Amhara elites. Hence such surgical attack on their ethnic brethren would eventually force Amhara elites to embrace ethno-nationalism and give up the throne of Ethiopian nationalism to the new claimant- Tigrean elites.
The sad thing is while the rulers experiment with all kind of dirty tricks to prolong their days in palace, innocent and poor farmers struggling to survive on a dollar a day income are pushed around. Making these farmers homeless at the time when people are barely surviving at their home due to the unbearably high cost of living is a heartless crime that sets a dangerous precedent, that must be condemned by everyone, in regardless of who we are or what political opinion we have.

This action should strongly be denounced. The parties administering their respective regional states might have agreed on terms [for evictions] but it is wrong regardless of the reasons for the uprooting of these citizens of Ethiopia. It is alarming as well to know Ethiopian citizens’ rights to movement in their country is decided by political party officials.

Abraha Desta, an activist based in Tigray, Ethiopia identified [amh] three reasons for activists to support the Amhara people:

The following should be our reasons to stand by the sides of our fellow citizens: 1) The people are Ethiopians, so if we are not standing by their side who is going to support them? 2) If what happens to the Amharas does not stop here by now we should know that tomorrow it is going to happen to everyone. 3) These acts might inflame ethnic politics which might turn into hate politics that will jeopardize the integrity of Ethiopia.

However, Mesfin Negash warned [amh] that these acts should not be taken as acts of a certain ethnic group against another ethnic group but rather acts of people who don’t have any sense of decency:

Today’s culprits of these mass evictions are trying to paint their acts and hide under ethnicity, but I believe a day shall come when these people will stand before a court of law. Though the evictees are Amharas, we should believe the perpetrators are not representatives of a certain ethnic group. Please be reminded that the ethnicity of wrong doers, looters and racists is indecency!

International Community must listen to these historical people. Even last Monday there was huge demonstration in front of Obama residence against Ethiopian current government barbarian act. It is time to act for international community.

I know Ethiopia. I know what Amhara means for Ethiopia. They are lovely and cultured people and gives beauty for our globe.
I'm feeling bad even in my whole life. shame for Ethiopia gove't.