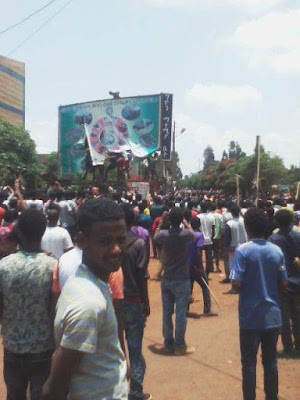 Fnote selam people is currently demonstrating. TPLF security forces shooting is hearing every where.On the other hand, Bahirdar home siting strike is continuing for another fourth days. Gonder start also the same strike today . Last week, it was recalled that Gonder's three days strike was completed successfully. Today's Gonder protest is another and fresh one. The same is happening in Oromia region. For last seven months most rural and urban areas of Harer, Bale, Shoa, Welega region residents are in continuous protest against TPLF.

The response from TPLF both in Amhara and Oromia regions is savage act. According to International human rights organisations and independent Ethiopian sources up to this week over 1,100 Ethiopians are killed with live bullet of TPLF security personnel. The situation is not hided from all over the world. Even last Sunday Rio Olympic´s typical title was not sport. It was about non-humanitarian act of TPLF on its own people. Athlete Feyisa Lelisa, after he finalised his 42 kms. marathon computition at the second level, he show his hands up and tell to an international community, Ethiopian protest against ethnocentric and dictatorial rule of TPLF. (See 'Maybe They Will Kill Me': Ethiopian Runner Feyisa Lilesa Stages Protest Against Government)

Having said this, the bad news is that TPLF ethnocentric and dictatorial regime didn't show any sign to respond the peoples' tangible demand of democracy and regime change. Moreover EPRDF central committee press release this week appreciates it's own so called past success.

On the other hand, many Ethiopians and humanright activists abroad are feeling bad on ignorant respond of USA and international community. These days people are calling USA, "Mr.concern state'. This is because US ignorance for daily killing Ethiopians by TPLF live bullet is sense less. That means  the sole American Embassy in Addis press release regarding the popular rise and government forces respond was expressed by  full of soft phrase, "USA is concerned".

Many believes that USA is loosing its long-aged base in Ethiopia. US was repeatedly expressing Its relations with dictatorial and ethnocentric government of TPLF is strategic and based on anti-Terrorism common goal. The case of Somalia was raised repeatedly by US high officials as typical example. But here US missed the big reality that Terrorism fighter is the mass Ethiopian people not dictator and isolated ´state´ of TPLF. Ethiopians need now regime change. No more no less. Infact not only regime change, they need also to be supported to establish responsible government both regionally and internationally. This is the key point to fight terrorism. TPLF is now isolated and counting its minutes to loose all power. This is the fact on the ground in Ethiopia. USA shouldn't make her top century foreign policy fail regarding Ethiopian political situation. It must stop all relation ship with TPLF as soon as possible  and stand on the side of nearly one-hundred million Ethiopians.