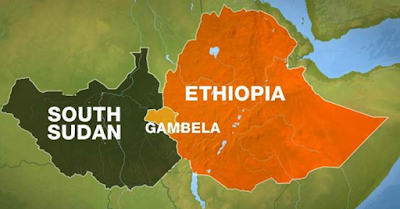 
We are very distraught by the death of our innocent civilians (children, women, and elderly people) who were recently massacred by Murle tribe of South Sudan.


e write this petition letter to you to consider our message as your greatest priority. How could we consider ourselves as citizens of the country where our mothers, fathers, Children, and all vulnerable people are not fully protected by the Federal Government?
Recent fighting lasted for many or long hours which allowed the attackers to kill as many civilians as they wanted.
Where were our Defense Forces, as well as our government officials at this horrible moment?
We are writing this letter on behalf of the Nuer Ethiopian Community, residing in the United States of America. We want to assure to you that the unceasing death of Ethiopian civilians is the point of these Murle tribe attacks, and is really going to be a long-term problem if there is no real action taking place to dissuade them. Any believable action from Ethiopian Defence Forces regarding this killing is needed as quick as possible.

On Friday April 15, 2016, 280 vulnerable, innocent people were killed and nearly 150 others were wounded by large group of 4,000 well equipped militias carried out on Ethiopia soil (Kebeles). Very miserable again! Therefore, the killing of 280 civilians within 12 hours, including children, elderly and woman by the South Sudanese Murle tribe, must be put in the books. Why? Is this true the killing was carried out by South Sudanese and killed these civilians on Ethiopian government watch? The Nuer Community in Diasporas is very suspicious... if so, what is the reason for them to kill more than 280 innocent civilians, abduct 108 children, and take 5,000 head of livestock in the recent massacre?

Questions: Where was the Ethiopian military at the time these murders happened in Kebeles? What delayed Ethiopian Defense Forces from rescuing innocent civilians as soon as possible, while the fighting was raging for more than 12 hours? Meanwhile, the two major roads linking Gambella to Nuer Zone are less than an hour, and from Lare to Mading Kebele is prominently wide open? What really caused our Defense Forces to not arrive before Murle finished murdering civilians?

Whatever the case, the Ethiopian Federal Government should take major action very swiftly, and very quickly, without any hesitation, to bring those children to their parents. Otherwise this will be repeated again and again. Does this mean the government of Ethiopia doesn’t care for innocent Ethiopian civilians as long as the authorities are safe for themselves? We have seen such kinds of killing, abduction, invasion and aggressive provocation against Ethiopian citizens, and we have never seen any reaction from the government. This time will not be the same as 9 years ago when the Murle attack happened in Ngor Kebele (Teluth) and later in Palbol Kebele, 7 years ago and the Ethiopia authority failed to act against attackers as they should.

Henceforth, we strongly condemn this barbaric killing by the extremists who attacked and killed the innocent civilians, abducted children, and took thousands of livestock by the hard-headed tribe Murle. This extremist group claims to be the Murle tribe from South Sudan, but are in fact misrepresenting the tribe’s hatred. The entire region of Gambella strongly condemns all sorts of violent acts carried out by the South Sudanese and must not be tolerated. On April 16, 2016, Regional President Ato Gatluak Tut went to all Kebeles, and confirmed the deceases, the wounding of hundreds of civilians, and the many abducted children. He also confirmed the attackers used heavy weapons and wore military uniforms.

Gambella Regional population issued statements in which they strongly condemn the killings and urged the government that those responsible be held accountable.

Recent killings have also sparked outrage to entire population of the region. The Region astonishment over the killings of the civilian population by neighborhood are a flagrant violation of international law. Your Excellency, Prime Minister Haile Mariam Desalegn, this is an outrageous crime against such young children, who shall protect this country in the future from enemies; you must put it in real consideration as quick as possible. The savage and despicable attacks on civilians are outrageous. Why did Ethiopia’s almighty military power fail to react so quickly and used air fighting jets? Why didn’t the Ethiopia Defense Force use main road as they can?

In conclusion---Our thoughts and prayers are with the loved one of those killed and seriously injured. We stand together with the people of Gambella Ethiopia in this time of sorrow. Condemning the violence and barbarism committed by the Murle tribe of South Sudan will never be forgotten. Such a massacre cannot go unpunished. More than 280 people, mostly civilians, have been killed in Nuer Zone, and the total children abducted from the Gambella Region this month alone is 125. For instance, the Bolim-Kun Wareda, Mangok Kebele, Chatyier Kebele, Banyrial Kebele and Madiang Kebele, attackers were declared by the South Sudanese Militias to be no retaliation to any reason that were drawn by Ethiopia, particular the major Zones, the Nuer Zone and the Anyuak Zone. The same militias also coordinated another attacked on Anyuak Zone, Jor Kebele and other surrounding Kebeles, took at least 11 children, and killed dozens innocent civilians The Nuer community condemns all these sorts of evil acts. This must not be tolerated.

The Nuer Community in Diaspora stands in solidarity with the families who have lost their loved ones during this difficult time. Our thoughts and prayers are with them. We know Ethiopian Defense Forces always was, always is and always will be strongest Forces ever! We condemn these horrific crimes in the strongest terms possible.

The author lives in the United States. He can be reached at drmach31@yahoo.com .