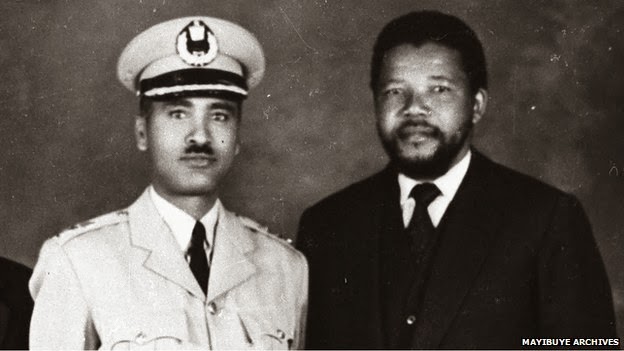 ….In July 1962, Col Fekadu Wakene taught South African political activist Nelson Mandela the tricks of guerrilla warfare - including how to plant explosives before slipping quietly away into the night.

Mr Mandela was in Ethiopia, learning how to be the commander-in-chief of Umkhonto we Sizwe - the armed wing of the African National Congress (ANC).

The group had announced its arrival at the end of 1961 by blowing-up electricity pylons in various places in South Africa.
Mr Mandela was in Ethiopia at the invitation of the emperor, an ardent supporter of Africa's decolonisation and African unity.

At the time, Ethiopia had one of the strongest armed forces on the continent.

Its troops were part of the UN peacekeeping operation during the Congo crisis in 1960 and a decade earlier Ethiopian soldiers had fought in the Korean war.

And the emperor had invited many other African liberation struggle fighters to be trained on Ethiopian soil….
Read more on BBC.co.uk link-  http://www.bbc.co.uk/news/world-africa-23515879