''The voting that will take place on May 24 will not provide citizens a meaningful role in selecting their next government.''
Washington Post May 18,2015 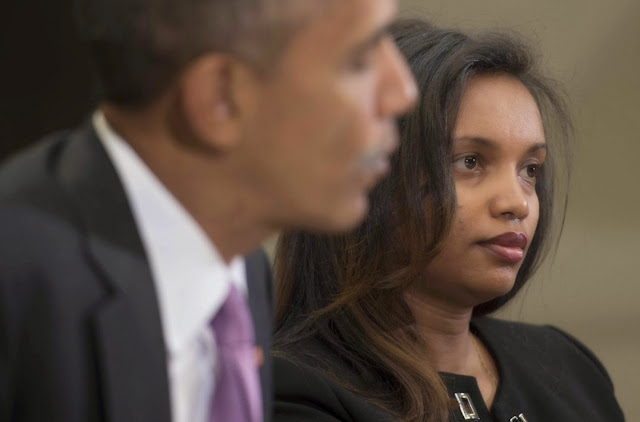 Ethiopian journalist Simegnish “Lily” Mengesha (R) sits with President Obama during a round table with persecuted journalist for World Press Freedom Day at the White House in Washington, DC, May 1, 2015. JIM WATSON/AFP/Getty Images

As Ethiopia votes, what’s ‘free and fair’ got to do with it?


Ethiopia, Washington’s security partner and Africa’s second most populous country, is scheduled to hold national elections on May 24. The ruling Ethiopian People’s Revolutionary Democratic Front (EPRDF) and its allied parties won 99.6 percent of the seats in the last round of elections in 2010. There is no doubt that the ruling party will win again.
The party has ruled since 1991 when it seized power following a prolonged civil war. It dominates all major political, economic, and social institutions, has virtually eliminated independent political space, and opposition parties are fractured and harassed. Ethiopia has jailed more journalists than any other country in Africa.
The EPRDF is an extremely strong and effective authoritarian party. Yet Wendy Sherman, the Under Secretary of Political Affairs in the Department of State, recently said, “Ethiopia is a democracy that is moving forward in an election that we expect to be free, fair and credible.” What roles do elections play in authoritarian states and what, if anything, do they have to do with “free, fair, and credible” standards?

Part of the answer is to recognize that elections and political parties in autocratic states play different roles than they do in democratic states. Electoral processes are used by authoritarian regimes to consolidate power and to demonstrate the ruling party’s dominance, as argued by scholars of comparative politics such as Schedler and Gandhi and Lust-Okar. Research by Geddes shows that single-party authoritarian regimes tend to be more stable and last longer than military or personalistic ones. Strong partiesmanage instability by encouraging intra-elite compromise, co-opting opposition, and institutionalizing incentives to reward loyalty. Elections and strong political parties thereby contribute to “authoritarian resilience,” as scholars note with reference to China, Iran and Syria, and Zimbabwe.

Non-competitive elections are common in authoritarian states and incumbents often win by incredible margins. In Sudan, President Omar al-Bashir won 94 percent of the vote in April 2015 elections, Uzbek President Islam Karimov over 90 percent in March 2015, and Kazak President Nursultan Nazarbayev 97 percent in April 2015. Rwandan President Paul Kagame, when asked if his 93 percent landslide in 2010 represented the will of the people, reportedly answered: “So, 93 percent – I wonder why it wasn’t higher than that?” The EPRDF’s 99.6 percent victory in 2010 created credibility problems in North American and European capitals where diplomats often asked, “Couldn’t they have just won by 60 or 75 percent?” But the point of elections under authoritarian rule is not to obtain a working majority or to win international approval. The purpose is to dominate domestic politics completely and thereby deter any leader from thinking he or she could challenge ruling party successfully. The dramatic, overwhelming victories send an important domestic message of strength and power, even as they strain credibility abroad.


The EPRDF recognizes the dangers it faces from competitive elections and that it democratizes at its peril. In 2005 Ethiopia held competitive elections, complete with significant opposition participation, major rallies, and televised debates. According to official results, the opposition’s share of seats in parliament increased from 12 to 172, representing 31 percent of the total. The opposition parties swept all the seats in Addis Ababa and many cabinet ministers and high-ranking officials lost their positions. This shift represented the potential for an important advance in democratization and a major break in the ruling party’s domination.
Members of the opposition, however, refused to accept the results and claimed that massive fraud had denied them outright victory. Some opposition leaders boycotted the parliament. Post-election demonstrations turned violent and were brutally put down by the Ethiopian military, leaving nearly 200 dead and an estimated 30,000arrested. The 2005 election began with a democratic opening but ended with what the Department of State characterized as the criminalization of dissent.
In the aftermath of the 2005 crisis, the EPRDF responded by demonstrating its extraordinary strength in using the levers of state power and its considerable organizational capacities to control all aspects of political life. New laws largely eliminated civil society institutions and the Anti-Terrorism Proclamation has been used against journalists and other critics. Just before a visit by Secretary of State Kerry in April 2014, the regime arrested a group of young bloggers who called themselves Zone Nine and charged them with terrorism. Washington recently urged Addis Ababa “to refrain from using its Anti-Terrorism Proclamation as a mechanism to curb the free exchange of ideas.”
As a consequence of its restrictions on politics over the past decade, the ruling party has little to worry about with regard to the opposition parties competing in the upcoming elections. The limits on formal political competition have made social mobilization outside of the electoral process more important. A series of non-violent protests in 2012 by Ethiopian Muslims provided an important model of sustained, peaceful social mobilization. The regime arrested the movement’s leadership and has tried to link the protests to external enemies and terrorism. In 2014, the security services quickly suppressed demonstrations on university campuses by Oromos, highlighting the historical sense of marginalization perceived by many in Ethiopia’s single largest ethnic group. In April 2015, a government organized rally to mourn the killing of Ethiopian migrants in Libya by the Islamic State (ISIS) ended with arrests and clashes between security forces and protestors. The Ethiopian regime has managed each of these challenges without significant difficulty but the underlying grievances remain.
Under Secretary of State Sherman characterized Ethiopia’s elections in terms of “free, fair, and credible” but that obscures the nature of the regime and mischaracterizes the functions of elections under authoritarianism. A Washington Post editorial recently criticized Sherman and argued: “If the election is not judged by independent observers to live up to Ms. Sherman’s billing, the administration should swallow her words — and change its approach.” But the results in Ethiopia and other authoritarian regimes holding elections are largely settled months if not years in advance, as powerful ruling parties restrict political opposition, civil society, and independent media in ways that virtually eliminate competition. The voting that will take place on May 24 will not provide citizens a meaningful role in selecting their next government. Such elections, however, are not pointless. As in other authoritarian states, elections play a key role in providing the setting for the ruling party to demonstrate its domination.
Terrence Lyons is an Associate Professor at the School for Conflict Analysis and Resolution, George Mason University. He began his research on Ethiopia in 1987, served as Senior Advisor to the Carter Center’s election monitoring mission to Ethiopia in 2005, and currently is writing a book on Ethiopian politics since 1991.
Source - Washington Post May 18,2015 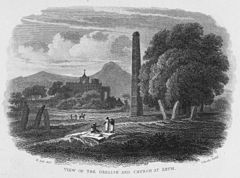