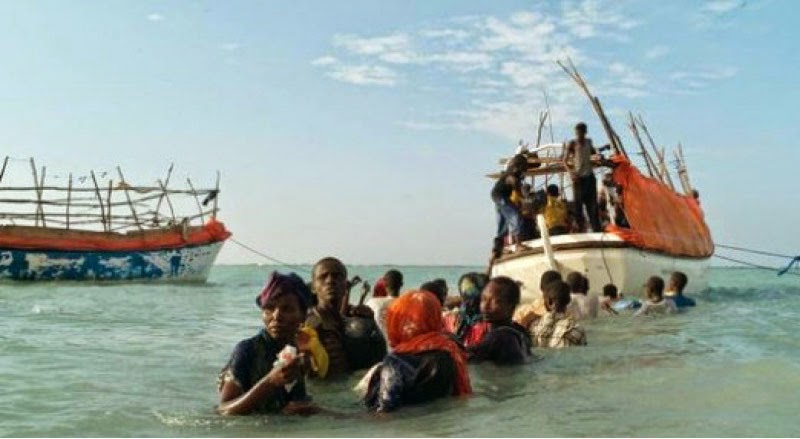 17 ETHIOPIANS DROWN OFF DHUBAB COAST IN TAIZ
source - Yemen Times
SANA’A, Dec, 29—Upwards of 17 Ethiopian migrants and one Yemeni smuggler drowned when the boat transporting them capsized off the coast of Dhubab city in Taiz governorate on Saturday evening, according to Shuja Mahdi, chief officer of the National Coast Guard Operations Department.

Ten Ethiopians survived the capsizing and were able to swim ashore, he said.

Nick Stanton, a communications officer with the UN Refugee Agency (UNHCR) in Yemen, told the Yemen Times on Monday that as of now the UN has received reports that five Ethiopians had died in the incident.

The Yemen Times contacted Birhane Meskal Kihisen, a member of the Diaspora Engagement Affairs Department at the Ethiopian Embassy, who claimed that his office had yet to receive any information regarding the incident.

Local fishermen were the first to be notified that the boat had capsized, according to Mahdi. They were radioed by the Yemeni smuggler who was aboard the ship. He called them to launch a rescue attempt. However, fishermen did not arrive in time, according to Mahdi. Those that survived swam ashore themselves. The fishermen later arrived at the coastline and helped transport the survivors to health clinics in Dhubab city.

Waters around the Gulf of Aden become hazardous between July and December, and so smugglers prefer to bring migrants into the country via the Dhubab and Al-Mokha coastlines located in Taiz governorate.

Whatever the route taken, the trek across the water remains a perilous journey that a growing number of Africans seem to be willing to risk. A vessel carrying 70 migrants capsized in the Red Sea on Dec. 5, with anywhere between 18 to 21 dying in the incident according to the UNHCR.

According to the Interior Ministry, coast guards have arrested 18 smugglers in 2014. While the national coast guard is not tasked with rescuing illegal immigrants, officer Mahdi says he and his colleagues do what they can to help those in danger.

Stanton told the Yemen Times that Sept. 2014 had witnessed the largest number of African migrants coming to Yemen from the Horn of Africa, with more than 12,800 fleeing from Ethiopia, Somalia and other countries. A continued spike in human rights abuses and drought in southern Somalia were the main factors behind this increase, he said.