The Tigray region of Ethiopia is becoming more safe after the TPLF was removed. Over 40 Ambassadors and Diplomats were enjoying themselves in Mekelle today. 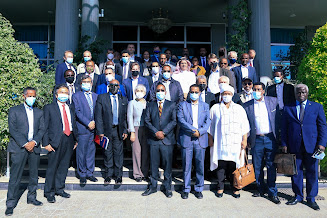 Over 40 Ambassadors and diplomats after visiting Mekele, March 10,2021

Ethiopia's transition to democracy is continuing with great support of the new generation. Even though there were ups and downs in the political environment of the country, Ethiopians' journey to democracy is becoming more visible. One of the recent events that will be a pushing factor towards democracy and stability is the National Election to be held in May,2021. Currently, it is possible to say most unstable situations, in different parts of the country,are almost under the control of the central Government led by Prime Minister Abiy Ahmed(PhD). In fact there are some armed groups in Western Welega zone and even in the Tigray region those who are cut from information and lost their directions. These are not well organized armed groups and will not even pass from the single campaign of the local militias.

It is a tremendous effort that the Ethiopian Government's accomplishment of its law enforcement process in Tigray region. Tigray People Liberation Front (TPLF),which was also killing and exploiting the region's people, was getting rid to fight with the central government for almost three consecutive years. However the Ethiopian National Defence Force (ENDF) can finalized the law enforcement process just within a few days. This is not only due to the ENDF's high standard capacity to mobilize any kind of war in any geographical area, but it was also because the TPLF's outdated and ethnocentric ideology has never been accepted by Ethiopians.

Today's event in Mekelle is another indicator of how the situation is almost under control.According to Ethiopian Foreign Minister official source, State Minister H.E. Ambassador Redwan Hussien and 40 resident Ambassadors and diplomats,including US Ambassador, in Addis Ababa have paid a visit to Mekelle city today,March 10/2021.The news elaborate that upon arrival at Alula Aba Nega Airport, in Tigray region capital Mekelle, they were warmly welcomed by H.E. Dr. Mulu Nega, Chief Executive of the Interim Administration of Tigray. Dr. Mulu Nega, and colleagues briefed the Ambassadors about current situations in Tigray, particularly on the rehabilitation and rebuilding efforts as well as security issues in the region.

It was recalled that in the recent press release of the Foreign Minister spokesperson, Amb. Dina Mufti, the Ethiopian Government has already covered 70% of food and other basic necessity demands of the Tigray Region. Now the Government is demanding Aid agencies and the international community,only to cover the remaining 30%, to provide all the necessary humanitarian support using the unfettered access granted to them by the federal government.

Here below are photos when over 40 Ambassadors and diplomats visit Mekele on March 10,2021 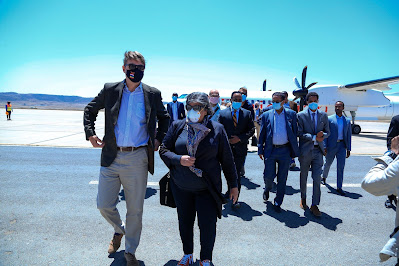 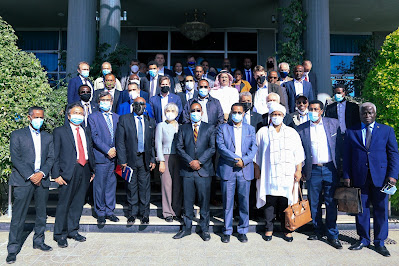 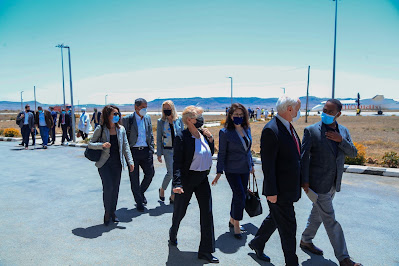