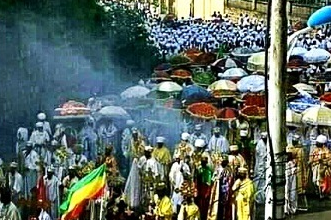 On Sunday 15th September 2019 in the Ethiopian capital of Addis Ababa and other towns across Ethiopia, thousands of people poured into the streets to protest against the unprecedented atrocities that are being committed against the Ethiopian Orthodox Tewahedo Church and her faithful.
While the organizing committee in Addis Ababa had postponed the demonstration by two months to give time for talks with government bodies, the demonstrations outside Addis Ababa took place. 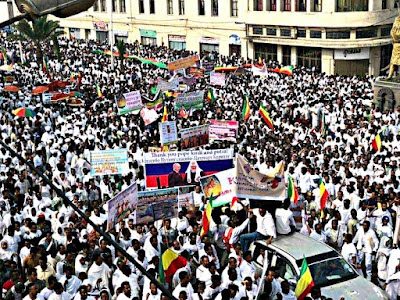 Reports from Bahir Dar, Gondar, Dessie, Kombolcha, Jimma, Debre Berhan, Debre Tabor, Tsegede, Dessie, Kombolcha and Gondar states that large numbers of Muslims also joined the protests in support of their Christian compatriots.
In Addis Ababa however, there was a very large police presence on the streets to prevent the demonstrators reaching Mesqel Square from their respective Church compounds. However, the demonstrators thronged the compounds of several Churches in the city (by singing, clapping and ululating,) demanding an end to the persecution of the Orthodox Church.
Huge banners thanking Patriarch Krill of Moscow and All Russia and President Putin of the Russian Federation were on display as well.
The above video shows protesters on the grounds of the Lideta Le Mariam (Nativity of the Virgin Mary) Monastery, in the large courtyard between the two Churches of the Monastery.
Source: OCP