Do not stand with the dying regime of Ethiopia. Stand with the future politics of the land - unity and democracy. 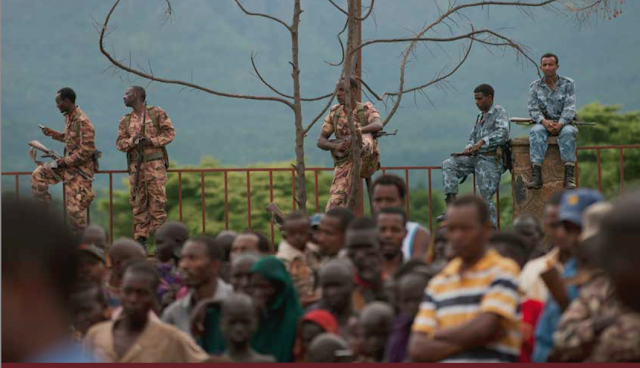 Ethiopia needs the special focus of an international community.  Free zone of terrorism, peace, and stability of the Horn of Africa, all have the direct and indirect link to the political, economic and social turmoil of Ethiopia. Currently, regarding Ethiopia, the sole choice that puts on international community´s table is to support and respect Ethiopia´s unity and hard way of travel to democracy. The current ethnocentric based regime led by TPLF (Tigray Peoples Liberation Front) is disintegrating by itself. In another way, it is dying the natural death of the dictators. In fact, the struggle of the people against TPLF brutal rule and its annex teams has already continued with a new and challenging full chapter. Its annex poppets organizations arranged themselves under the name of Amhara and Oromo ethnics of the country. For the last seven days only the speaker of the house, Aba Dulla and senior advisor and policy maker, since TPLF came to power, Mr. Bereket Semeon has left their office with unknown reasons.

The internal and external political environment of Ethiopia is boiling in a real way. In this week, Ten thousand participated protests are going on in all part of the country including around the capital Addis Ababa. The regime is continuing to create new clashes among different ethnic groups. It is well believed by ordinary Ethiopians that the recent clashes between Ethiopian-Somali and Oromo ethnics were masterminded and secretly supported by TPLF top officials. Addis Ababa´s based opposition group called MEDREK had already disclosed as the regime was the main organizer to the mentioned clash which resulted for over one-hundred thousand Oromo ethnics displaced from Jijiga and other Ethiopian Somali regions to the high land area of Harare town.

There are some attempts that the international community is trying to challenge the regime to respect human rights condition. Human Rights Watch annual reports of 2015 and 2016 are typical examples of the challenges. In addition to that the US government is also mobilizing new initiative to impose on Ethiopian current government through H.Res 128 . However, the regime was ready to present its neck for the sake of its political power. US was told that if H.Res 128 will pass by the US Congress, TPLF is ready to cease all its cooperations with the international activities against terrorism in the horn of Africa. Therefore the legislation delays for some days but still active to be passed. It was quite clear any Government in our globe could not be allowed to put some precondition for the safety of its own people to protect from any form of terrorism. Protecting terrorism should not be presented for negotiation in terms of human rights issue. Because to respect human rights is nothing but an obligation of any government. However such normal way of thought is not applicable when we come to TPLF. It is just attempting to replace the life of the people with the extent of its political power for another dictatorial year.

To wind up the note, I think, the following four points should be taken into consideration by the international community and friends of Ethiopia and Ethiopians in all over the world. These are: - One, the TPLF regime is dying so fast both by its natural death after controlling an overall power of the nation for the quarter century and the struggle of the people. Two, the anti-terrorism struggle within the Horn of Africa will not be functional without the presence of democratic government in Ethiopia. The reason for that is terrorism could be protected mainly by the goodwill active participation of the entire people, not only by an act of few dictators within a non-functional government. Three, change is coming soon in Ethiopia. The important question is if the coming change could not assure the unity of the country, new clash and instability could have erupted and ugly form of a new chapter of the horn of Africa could be started. Four, it must be so clear that even if the current TPLF regime is trying to retain power through the assistance of the west, the situation will go from bad to worse. Therefore it is so crucial to the international community and friends of Ethiopia and Ethiopians to stand on the side of the people plus assist in all possible ways to keep the unity of the nation and transformation from a quarter century ethnocentric regime of TPLF to democratic one. Do not stand with the dying regime of Ethiopia. Stand with the future politics of Ethiopia. The future of Ethiopia is nothing but united and democratic political system.