Ethiopia - TPLF-led regime is walking on its own grave. High tension in all part of the country.(Gudayachn.com - special report) 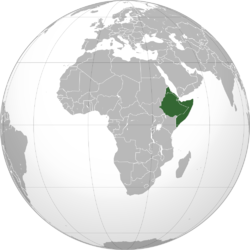 On the other hand, eye witnesses informed  Washington D.C based Ethiopian Satellite Television (ESAT),  the two longest borders that Ethiopia  sharing with Eritrea and Sudan are almost similar to war zone. Armed clashes between local farmers and TPLF militias are still continuing for the past three months. It was recalled, TPLF has made internal agreement with Sudan to demarcate the border between the two countries (Ethiopia & Sudan).

This agreement has faced strong opposition both from  Ethiopian farmers who have lost their fertile land (at the result of non-transparent demarcation agreement) and the general public. The local Ethiopian farmers have already began to resist  Sudan soldiers and ceased them not to cross to Ethiopian border. Currently the local farmers have already lost their trust on TPLF. Because TPLF has already confirmed as it is protecting ''the national interest of Sudan''.The Sudan government, in exchange, will give guarantee not to support TPLF's opposition powers typically Patriotic Ginbot 7 movement.Sudan news paper ''Sudan Tribune'' has confirmed as the non-transparent final stage of border demarkation, has faced strong resistance from Ethiopian oppositions.
''However, the Ethiopian opposition accuses the ruling party of abandoning Ethiopian territory to Sudan'' (Sudan Tribune, Nov.23/2015).

The good news of the day, on the other hand, is that the International community is responding diplomatically to Ethiopia current security problem and ethnocentric rule of governance.European Union Parliament as at of today, December 1, 2015, invited the prominent opposition leader Prof. Berhanu Nega to be  testified on the current political, economic and social condition  of Ethiopia. (

Prof. Berhanu, leader of Patriotic Ginbot 7 armed opposition movement, based in Eritrea, could well explain why the TPLF regime must be replaced by the democratic government.
''Don't be surprised what ever measure Ethiopian people could take on the current regime'' said Prof.Berhanu speaking at European Union Parliament this morning. Continuing his speech for 25 minutes and discussed on the matter with the member of the parliament for more than 2 hours, he emphasised as the international Community has also responsibility for the peace and stability of Ethiopia. (read the news on ESAT)

On the other hand at the time the professor testified at Brussels,  TPLF prison located in Gondar town (north west of Ethiopia 388 miles far away from Khartoum, Sudan ) was firing. According to ESAT, Dec.1,2015 evening news desk, over 40 prisoners are died and more than 400 prisoners could flee. Gondar town's residents have attempted and most of them are succeeded in saving the prisoners who were rushing them selves both from the fire incidence and TPLF army shooting live bullet towards them.

Last but not least, currently, in all directions the regime's armies are busy on facing to crash the general public movement which stands against the quarter-century aged TPLF dictatorial rule . The situation seems not less than the TPLF regime is walking on its grave.