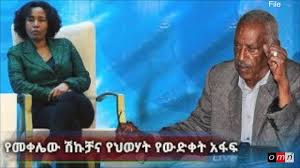 I was about to go to my bed before the pro-TPLF (Daniel Berhane) social media page small article pushed me back to my computer. His article is trying to tell us, as if this week's TPLF central committee conflict was a strength of the ethnocentric party.
My view regarding the TPLF condition is completely contrary to Daniel. It is quite true that TPLF internal conflict continues also in this week. After more than two months of meeting, four out of nine could be pushed from the central committee membership by force.It is possible to say that they are pushed by force. Because none of them apply to leave their position. This will widen also the big difference among top military officials who are also TPLF members.
The process of overthrowing corrupt central committee members by another corrupt and more dictator members is really meaningless and senseless action for most Ethiopians.The action is a good indicator of the party could not brought the new generation even after more than quarter century of its stay on power. This is  a sign also for ethnocentric ideology complete failure plus the disability to penetrate the strong ideology of Unity. The ideology of 'Unity with differences' and real federalism (federalism not based on ethnicity) is well accepted, more governing and proved ideology among the new generation.
The central committee of TPLF is currently destabilized seriously. Those who have pushed and overthrown from the TPLF central committee membership, including the late PM Meles's wife Azeb Mesfin and Abay Woldu, may mobilize their supporters even from the army top officers to disqualify Aboy Sibhatis group. Therefore there will be more possibility of raising unrest in Ethiopia. This is the fact that the diplomatic and international community should take into consideration.
Generally, Pro- TPLF propagandists like my FB friend Daniel, are attempting as if the party comes out strongly, The reality is showing in contrary . TPLF's level of acceptance and the status of confidence even among EPRDF member bodies has fallen down sharply. TPLF central committee members are well known corrupt people not only in Ethiopia but in East Africa. Therefore all the situation is leading TPLF to be more disintegrate and incapable even to keep peace and stability in Ethiopia

Western Experts judgment on the Nobel Laurent without contextual Understanding